An EHPAD and a new 346-bed hospital in Belley 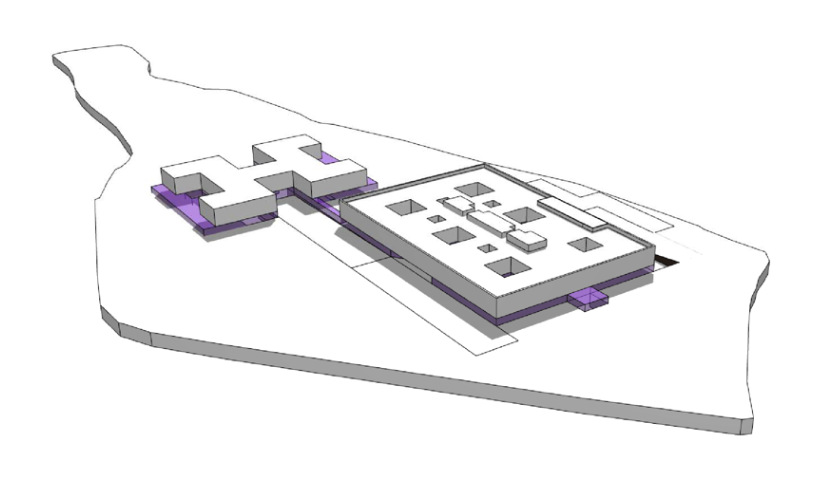 Integrate into a future territory
The MCO and EHPAD facilities, at the crossroads of Narvik and Hoff avenues, are identified for this peripheral sector as promising for the future. They reinforce its diversity and do not fail to enrich and enhance its diffuse residential housing, its local public facilities (school complex, festival hall, gymnasium...) and its industrial and craft activities.
To integrate smoothly into this plural and modest built environment, the two new facilities seek to minimize their impact on the landscape. For this purpose:
They reduce their programmatic possibilities as much as possible their height - with, for the MCO, an R+1 frame which is the lowest of the minivans ever built; with the EHPAD, an R+2 frame which, despite its additional floor, succeeds, by playing on the altimetry of its seat and by taking advantage of the imposed height of the MCO intervention platform, in stretching a spade to the equivalent height (about 10 m) of its co-program. And it is ultimately the same skyline that they draw. A skyline in perfect resonance with the current built context and which announces with determination the one that tomorrow could highlight a new urban polarity.
They also place their longest facade away from the service roads and the roundabout access point to the site. A distance favourable to the development of a landscaped car park whose size and richness of the plantations, by amplifying the effect of perspective that it induces, still seems to the observers - residents or visitors - to lower the general outline of the buildings.