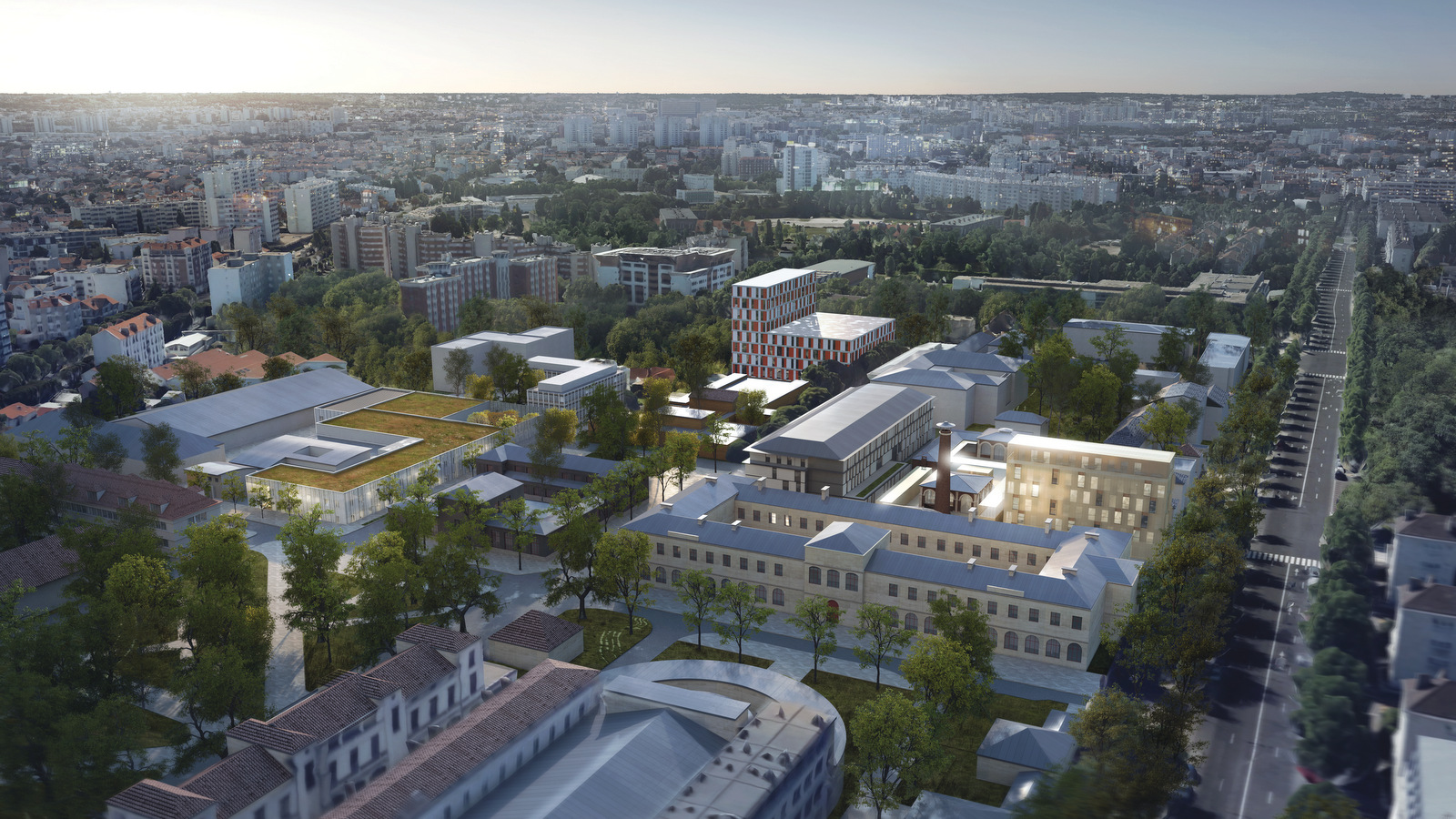 For its historical territory - and the reputation of its teaching - EnvA has great ambitions.
By defining a real estate master plan and committing to the short-term completion and/or restructuring of four flagship facilities, it confirms its determination to seal its reputation in the 21st century.
By entrusting two of them - Nocard and Auguste Chauveau - to the same team of designers, it attests to the dynamism it wishes to foster in its future projects. These two equipments - totally separate in their destinations as well as in their functional and technical requirements - must together carry the same purpose. Together, we can predict the evolution of the site and its image.
But it is with humility that they choose to be part of the past and future history of the place and it is with the elegance of abstraction that they draw an architecture that is both enveloping and evanescent.
The Nocard site, privileged for its proximity to Camille Guérin, with whom it will constitute a real clinical centre, must defy some constraints - patrimonial since, subject to the vigilance of the DRAC, it must contribute to the enhancement of its original buildings and take into account its opposite with the Blin building, and urban since, subject to the rules of the PLU, it must still take into account the neighbouring plot invested by an old housing.
And if its densification is thus delicate, it ultimately finds all its relevance in the respect of the imposed figures. And sometimes, it is true, in their reinterpretation, provided that it is always motivated by the desire to exacerbate the qualities of the existing site...
Thus, the raising of the west wing, although accepted by the DRAC, was avoided - by categorical refusal to denature the roof and by conservatory intent in view of the original design of the building. To this solution, proposed to house necessary surfaces at R+1, was therefore favoured the realization of a partial underground level accepting all the functions that could be subjected to it.
Thus, new buildings are not built in brick, preferring to this suggested material, a unique material, softer, more silky, able to settle in the site in resonance with the built history. A subtle and poetic resonance reflected in an anodised, champagne-coloured and perforated aluminium sheet. The design of the perforations re-editing the brick's layout. Which seems to gradually (from bottom to top) dematerialize, to ultimately leave only the finesse of its joints to be read, and appear at the end of the ascending race, like a "skinned" of the material. Skinned all the more opportune as it becomes at the head of the building here aviary and there simple screen of a terrace belvedere.
Finally, the surfaces built to satisfy the scale of the program choose to be sequenced and distributed in refined volumes.
Thus, it was installed opposite the west wing of the Blin building, in the notch in the parcel of land that touches the limit of the EnvA territory from its bow, a single-sided blade building, built at the height of the old chimney and echoing the residential buildings that also offer their bow at the avenue du Général de Gaulle. An item building, therefore, punctuating the site and the linear layout of the avenue, it identifies itself as the delicate witness of the renewal of EnvA.
Two "matchstick" buildings are also installed on either side of the boiler room and its chimney, in the axis of the historic wings. Two low buildings that delimit a wide square in front of the rotunda of the Blin building and which, by continuing their course beyond the influence of the boiler room, reinforce the symmetry effects of the original composition.
In the north-south axis of the said composition, a small sanitary block is still installed, instead of the exact location of the historic urinals, which makes it possible to sequence the external spaces and to understand the proportions of the central square courtyard, the design of which is also confirmed by the unfolding, in its upper periphery, of a glass canopy. Finally, in between - between the west wing and the parcel boundary - a complementary building was finally installed, notably liberated by the demolition of the "gardeners and pathologies" building, which, if it envelops the west wing, leaves the upper part as well as the edge of the roof, without contradicting the PLU.
In this universe of allegiance to history, the program succeeds in infiltrating
with simplicity and precision, with efficiency and respect for the required functional proximity, the necessary principles of access security and sanitary facilities, technical constraints and inherent challenges